Jennifer Keenan Speaks on the Artwork Displayed at the Winery

In this video, Keenan Winery Artistic Director and “Wine Wife,” Jennifer Keenan, talks about the art exhibited at Keenan Winery on Spring Mountain in Napa Valley above St. Helena, CA. Here, she introduces the Dorothea Lange Photo Exhibit, one of the most renowned photographers of our time. She also talks about the Yarn Bombed bicycle hanging above the fireplace in the tasting room, and the old and new wine case designs at the winery. We also get a glimpse into the wonderful wine designs of Artistic Director Jennifer Keenan.

Keenan Winery is thrilled to be adding a highly unique collection of Dorothea Lang photographic art to the winery. Guests will enjoy the photos this Spring and Summer while they sip Cabernet Sauvignon, Merlot, Syrah, Zinfandel, Chardonnay and Mernet, the proprietary Keenan blend of Mer(lot) and (Caber)net in the Keenan Winery tasting room.

Michael Keenan’s wife, Jennifer Walker Keenan, hand-selected this collection of extremely rare Dorthea Lange photographs to display in the Keenan Winery tasting room. She acquired these photos through a special arrangement with the Oakland Museum of California.

Dorothea Lange is revered for taking some of the most iconic American photographs of the 20th century. The works displayed in the Keenan Tasting Room resonate with contemporary audiences. The photographs Jennifer Walker Keenan has selected timelessly reflect a deep connection to the soil and people of a rural community overcoming challenges of the 1920s, much as vintners throughout Napa draw together our community to overcome the challenges of the past two years’ earthquake and fires.

About Dorothea Lange and The Oakland Museum of California 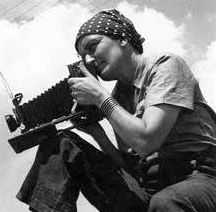 Dorothea Lange, 1895 -1965, was a California-American documentary photographer, whose portraits of displaced farmers during the Great Depression greatly influenced later documentary and journalistic photography. Lange was born in Hoboken New Jersey and was educated in photography at Columbia University in New York City. She apprenticed unofficially to a number of New York photography studios, and left New York in 1918, with a girl friend. That trip around the world ended early in in San Francisco, where she opened a successful portrait studio and lived across the bay.

During the Great Depression, took her photography to the street. Shots of the disenfranchised, unemployed and homeless people led to her work with with the federal Resettlement Administration and Farm Security Administration, and an entire body of work for which she is eternally known.

The Oakland Museum of California (OMCA) houses with pride Lange’s personal archive, a gift from the artists 2nd husband Paul Schuster Taylor that includes 25,000 negatives, 6,000 vintage prints, field notes, and personal memorabilia.   Over forty years ago, the OMCA brought together art, history, and natural sciences.  The multidisciplinary celebration of of California, containing over 1.9 million art works, artifacts, ethnographic objects, nature specimens, and photos—attempt to define the essence of California.

Here's to our one and only, ever-awesome Tasting Room Manger, Laura March... HAPPY BIRTHDAY!

Keenan Awarded in the World’s Top 100 Wineries for the Seventh Time!

The 1993 Cabernet Sauvignon begins a new era for Keenan as this is the first vintage with winemaker Nils Venge actively involved in the wine making process. Nils has aided Keenan in softening the big tannins of our mountain grown Cabernet, while retaining our rich character and full body. Our 1993 vintage shows deep raspberry fruit, layered with hints of mint, spice and tobacco; subtle oak flavors make the wine complete. The ‘93 Cabernet’s luscious berry fruit and solid tannin structure make this wine very enjoyable now, while still retaining the
ability to age well.

Our Hillside Estate Cabernet Sauvignon expresses the concentrated flavors and bouquet that are characteristic of our Spring Mountain vineyards. The wine had a minimal amount of “time on the skins”; Keenan has no problem with extraction from the intense mountain fruit. This Cabernet was aged in French oak barrels for 20 months providing a sweet oak background that integrates well with the ripe fruit characters. The wine was bottle aged for an additional 30months, creating an exquisite balance of tannin and body.. Keenan considers this wine to be a fine accompaniment to rich, full flavored meals. The 1993 Cabernet Sauvignon was made to stand up to the boldest grilled meat entrés, but also has the complexity and spicy character to nicely compliment lighter, well seasoned food.